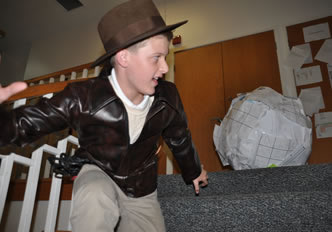 Students will understand and apply the following:

These student produced, original short films are then showcased on the big screen at a local movie theater for family, friends, and the public at the annual New Vista School Film Fest.  This much-anticipated event allows the students to show off their months of hard work, talent and dedication to this large creative project.

Each year, the personal growth of the students amazes all who view the Film Fest, as well as the students themselves.  Students who are shy or unsure of their communication skills often surprise themselves by learning to face their fears and act in the films.  Those with academic struggles get to see themselves as the author of a film script for a large audience.  Students also learn to recognize and encourage other students’ new found talents.

Students who participate in the Media Arts Program and Film Fest gain a tremendous amount of personal confidence and pride in their abilities that lives on long after the Film Fest is over.   Students not only see their imagination brought to life on the big screen, they learn to envision how to incorporate these skills into life after school.

The Media Arts Program and Film Fest are visible examples of what we do at New Vista School every day to help students: realize their hidden skills and talents, recognize and appreciate those qualities in others, communicate positively and effectively, and apply those skills to their personal lives and future careers.

Featured Films from 2017: Murder is Served

The success of New Vista School is the result of a strong partnership between the Board of Directors and administration, faculty, parents, students, community organizations and volunteers.